In this section of our site, we would like to share some of the various ideas that have worked very well for the children. Some of these ideas were the teachers', some were the students'. Some of the curricula are what we developed, some were developed by others and we found them to be very worthwhile.

Please take a look and use whatever you can in your situation. The highlighted links will take you to a page dedicated to each idea. If you are interested in any of these ideas, but would like to talk with us about them, please email us at jkhughes@stmichaelschool.us.

Choosing curricula for the various subjects to be taught can be very difficult, partly because there are so many choices.  Deciding which math curriculum to use is perhaps especially difficult because of the multitude of options.  How does one answer the question, "On what basis do I choose one rather than another?"

We have used many math curricula in our thirty-plus years of teaching, and have developed four criteria which we would like to share.  The article, Some Thoughts on Choosing a Math Curriculum, will hopefully be helpful.

Several years ago we came across a publisher called Key Curriculum Press. They publish curricula on a variety of math topics, including a series of non-intimidating, inexpensive, 55 page books. The topics include measurement, metric measurement, fractions, decimals, percent, algebra, and geometry.

We used the algebra series for a few students who needed a “softer” approach, but we used the geometry for everyone. Never had I experienced children asking for more math homework, but that is what happened with the geometry series, called Key To Geometry.

Try a Poetry Tea as a wonderful way of exposing children to poetry in a very enjoyable, low pressure setting.  This section also includes links to some of our favorite poems. 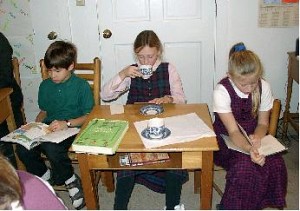 Celebrating the Feast of St. Brigid

We celebrated St. Brigid’s Day, each year on February 1, by making Irish Soda Bread and butter. Sometimes we also make other crafts, but we always make the bread and butter, tell the story of her life and sing the troparion in her honor. We often have tea with our bread and butter.

We also make extra to give away, to emphasize caring for others and hospitality, as the saint did.

Here is a Life of St. Brigid, and here is a recipe for the Irish Soda Bread. We hope you enjoy reading her life and making Irish Soda Bread and butter. It is a delightful custom.

There are several sites with more information about this saint, and a lovely icon at http://comeandseeicons.com/b/cap11.htm

When St. Patrick arrived in Ireland to preach the gospel, he encountered much opposition from the Druid leaders. One of the greatest opponents was a king named Loegaire, son of Niall. King Loegaire and his servants had failed in their contests with St. Patrick so they devised a plan to kill him. The king invited him to his residence in Tara, saying that there he would submit himself before St. Patrick officially. The plan was to ambush St. Patrick and his disciples as they journeyed.

St. Patrick, knowing the king’s deceit, sang a hymn as a prayer while he traveled to Tara. The title, The Deer’s Cry, comes from the fact that the king’s men never saw St. Patrick and his disciples, but only a herd of deer passing by.

We usually recite The Deer's Cry, which is also called The Lorica, each morning for several weeks in the spring. The children naturally "act out" the prayer with various movements.

Here are two files of The Deer’s Cry, one designed for 8.5 x 14 paper, landscape, and one for 8.5 x 11 portrait. The translation is from Celtic Christianity, Ecology and Holiness, an anthology by Christopher Bamford and William Parker Marsh The Beauty of the Times Tables

Did you ever see the beautiful Patterns in the Simple Times Tables? There are patterns within patterns. Can you find them? Several years ago, we heard of a math game that was advertised to be suitable for ages 10 to Nuclear Physicist. Since that sounded like an interesting age range, we checked it out.  We used it and the children loved, although not immediately. To learn more about this game, click here.

Rather than have the children come into the school and immediately go to their various classes, we all gathered to start the day together.  During this first period, which became known as "The Opening", we prayed, learned Psalms, learned poetry, sang, and particated in various movement activites.

For details, learn more about The Morning Opening

This curriculum has a special place in our hearts because it was clearly by the grace of God, and not by our planning, that it developed and incorporated so many aspects of Orthodox education.  First, it taught the children many of the foundational events in the Old Testament.  Second, it gave them an opportunity to struggle to create something of beauty concerning those events by using watercolors to paint reprentations of the event.  Third, they learned, step by step, the art of narrative writing. Finally, they had an opportunity to present the fruits of their labors to others and to have an experience of public speaking.

Each morning, before we start the regular classes, the whole school, (all 15-20) of us, would gather for prayer, recitation of Psalms and poetry, singing, and enjoy some challeging movement games.  A couple of schools have asked us to write out the instructions for these games, so we have done so.  Most of the games require at least five or six students, so the typical home-schooling family may not be able to use them.  However, the games would be a great addition to any gathering where there are more children ready to play.

The instructions can be downloaded here, as a PDF file. If you are not able to teach Latin or Greek, but would like your children to appreciate the great part these ancient languages play in our English language, we whole-heartedly recommend Rummy Roots.